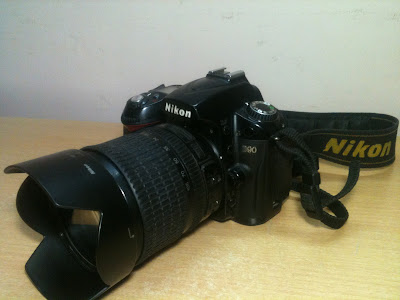 After a long time shooting with Point & Shoot, I finally decided to go with DSLR because of its ability to control exposure in shots and lens flexibility. After a lot of research, I shortlisted Nikon D5100 and Nikon D90. Nikon D5100 being a modern camera has really great features like flip-out screen, 1080p HD video etc, but not having built-in focus motor was really a deal breaker for me. Nikon D90 being not much modern is still very solid camera. Nikon India Technical Office once said "Nikon D90 is a hot cake, go grab it.". So, I decided to spent more money and bought slightly used Nikon D90 with a kit lens 18-105mm f/3.5-5.6. Also bought Marumi 67mm UV filter with it. 18-105mm will be ideal lens, but I will definitely buy 50mm f/1.8D and 70-300mm f/4-5.6G.

Looking at it, this was my first full encounter with DSLR, I am still trying to understand it :) I will share clicks very soon, meanwhile if you like to, you can add me on Flickr.

There are often situations, when your client wants series of Print out of form with data populated dynamically. These forms are designed Official and follows a legal format. In designing, the issue which frustrates designers a lot is uneven layout in different Browsers. Same issue occurs when we want to print from a Web Page (CSS for Print) or Document (Office Word). Luckily, for that purpose we have a perfect solution, and that is PDF (Portable Document Format). PDF Format always prints same on paper as we see on the screen (like WYSIWYG). The scope of this article is to show how to utilize “iTextSharp” Tool to insert data into the fields of a PDF File. I will try to demonstrate all the necessary controls that are used in forms.

I'm tired of being what you want me to be


So, this is my new addiction. Song is "Numb" by Linkin Park. I just love it, each and every word in the song is so beautiful and so true. To me, its about the burden of live up to someone else's expectations but finally you ended up that you want to be on your own.

Email ThisBlogThis!Share to TwitterShare to FacebookShare to Pinterest
Labels: Music

.NET Framework with no doubt is very extensible and has a wide range of Classes which helps you to do anything, really anything. In case of graphics/image manipulation, there is a library called GDI(Graphics Device Interface) which is a part of .NET Framework and has a wide range of classes to perform operations like Create/Edit/Draw/Save on Image/Graphics. The scope of this article will be to opening a image file and sending Response as image which is Binary, so an ASP file (.aspx) act as the Image File which can be used inside the Generic <img> tag as the source. All of the code will be in C#.

Email ThisBlogThis!Share to TwitterShare to FacebookShare to Pinterest
Labels: ASP.NET

It is now quite long, I have updated blog. Actually, it was hard time for me. There were whole lot of bad and some good things happened during this time. Things like not getting good grades and even more worse that again got compartment in one of the subject, really making me fell down. At one point of time, I even thought of stop doing all these computer stuff. But luckily, I can't. :) Later on, me and a friend, was discussing about doing something together and so decided to start a Technology Blog. We started off with very excitement. But later on, we don't write much on it. By the way, blog is GeekSingh.com.

When I was new in Web Technology, it seems like PHP is only giant available to develop Dynamic Web Applications. I really work hard on learning and practicing it. It was really fun. But when I try to build larger Applications. I got stucked every-time. There was so many ideas, which I was unable to implement fully, I always got stuck in between the Projects. The reason is, PHP is a scripting language, which is not targeted for developing a specific kind of Web Applications.

If Websites were People...